To Blackmail a Di Stone 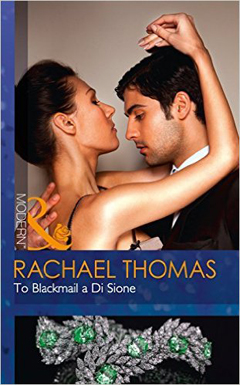 To Blackmail a Di Sione is book three in The Billionaire’s Legacy and my first continuity story. It was great fun to weave the other characters from the series in around my story and I’m really looking forward to reading the other seven books.
Bianca Di Sione is one of the well-known Di Sione children. Although she has built her own PR company and to all around her is successful and confident, she hasn’t got over the loss of her parents when she was very young. This insecurity was compounded when as a teenager the man she’d believed loved her, used her just because she was a Di Sione. So when she meets the revengeful and incredibly attractive Liev Dragunov it’s not just sparks that fly.
Determined to secure the bracelet, often referred to as one of The Lost Mistresses, her terminally ill grandfather has asked her to find for him, Bianca begins a journey that will change her life. What she doesn’t bargain on is Liev buying the bracelet then using it to blackmail her. She goes along with his plans in the hope that she can buy the bracelet from him, but as she discovers more about the sexy Russian billionaire, she finds herself falling for him.