Published: 28 May 2012
The picturesque seaside town of Aberaeron yesterday buzzed with excitement as people came to see the Olympic Torch pass through the town.An hour before the torch itself arrived the entourage of vehicles accompanying it passed through the town, now full of people all waiting for a glimpse of history in the making. 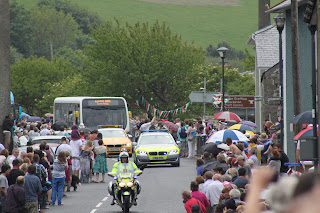 A Welsh Cob was used in the first part of the relay through the town, then it was passed to the runners and finally, as the sun was smothered by clouds and rain began to fall I caught the first glimpse of the flame. In the picture below, between the bus and the lorry, as if protected by the red umbrella, is the flame! 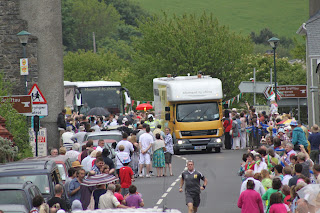 Everyone cheered as the flame passed by and jostled for position to get a photograph of it. 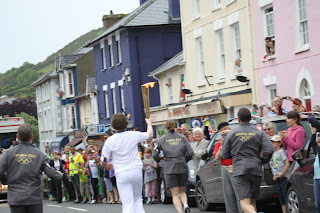