Published: 06 December 2013
After what seemed like weeks living off the adrenalin of So You Think You Can Write, the winner was announced this week. I'd waited by the phone - just in case. I'd be a liar if I didn't admit to that!The winner was Tanya Wright with her entry, If Only and I think it might be a good idea to grab a box of tissues before clicking on this link!As for my entry, well I've still got my fingers crossed that an editor will like my story and want to work with me. During the last few weeks life took on a surreal feel. I attended the RNA Winter Party, met with editors and authors from Mills and Boon, who all seemed excited by my Top 10 entry. Which leaves me with hope! 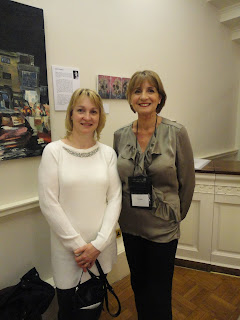 With Liz Harris﻿
I also did something that has been on my wish list for a long time. I went on the London Eye, which was almost dreamlike again, as it was a guided trip with just two other people. I just happened to be in the right place at the right time! 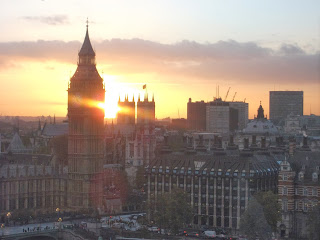 Sunset behind Big Ben
﻿
I am a good way into my next story and hope it proves to be as successful as Behind the Scandalous Façade. I'd also like to say a massive thank you to everyone who has supported my through all the stages of this competition. I couldn't have done it without friends like you!