Back from London and the RNA Summer Party

Published: 26 May 2014
This week I went to London, for the RNA Summer Party to support fellow Write Romantic, Helen Phifer, who’d been nominated for The Joan Hessayon Award, with her brilliant debut, The Ghost House. It was also great to catch up with other writers and make new friends. You can find out more about those nominated and the winner, Jo Thomas here. 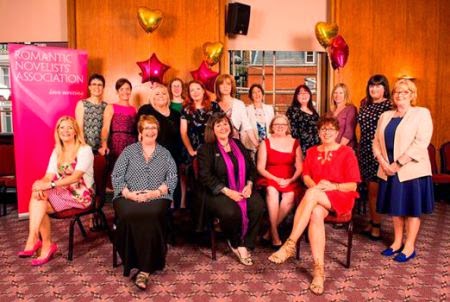 The official RNA photograph of the nominees.

This year the trip to London was extra special, because I met with my editor. This meant going to Romance HQ, a place I’ve dreamed of going to for so long. What I didn’t expect was to be shown the cover of my very first book, A Deal Before The Altar, out in October 2014. I was completely stunned into silence, but I absolutely love the cover and can’t wait to be able to share it here!
Whilst I was enjoying lunch in a fantastic restaurant with my editor and my mentor editor from the So You Think You Can Write 2013 competition a terrific thunderstorm erupted over London, but even that didn’t dampen my excitement. It actually made me think of a scene from my first book when a storm breaks out and Georgina is forced to deal, not only with her fear of storms, but the enigmatic Santos.
I found out later, that lightning had caused a bit of drama that afternoon in London, when it struck the Shard. Fortunately by the time I made my way back to my hotel the sun was shining again and I was on cloud nine. I’m still there!
Prev Next