Published: 23 July 2014
I can't believe that it was only six months ago that I got 'the call' from Harlequin Mills and Boon offering me a two book contract. Those six months have flown by and during that time I've learnt so much.The biggest excitement was seeing the cover of my debut A Deal Before The Altar for the first time.

My second book was the hardest book I've ever written. When I started it during the So You Think You Can Write competition I never thought for one moment it would become the second book of a contract! Suddenly the pressure was on, but after several rounds of revisions, during which I learnt so much working with my editor, it now has a fabulous title. Claimed by the Sheikh will be available next year. 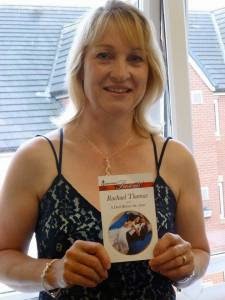 I attended the RNA summer party in London and the annual conference in Telford, no longer as a New Writers' Scheme member, which is such a brilliant feeling after seven years of submitting to NWS.

I was so thrilled with my first cover that I organised postcards to go into the goody bags at the conference. Here's a photo of me with the postcard.

I'm currently working towards a deadline with my third book and this time I can honestly say I've loved writing the story more than any other.

The excitement of seeing my book on the shelves and holding it in my hands is still to come and I can't wait!

A Deal Before The Altar is available for pre-order on amazon, which still seems unreal. It will also be on the Mills and Boon website and in the shops during October.