From Rejection to Publication

Published: 05 October 2015
Before I had my dream come true moment of becoming a published writer, I had, as part of what I’d always considered my apprenticeship, eight complete manuscripts that hadn’t made the grade and four false starts languishing on my computer. It was my thirteenth attempt and entry into So You Think You Can Write 2013 which made it. But all those other stories put together make up a lot of words, time and effort and even though some were rejected, they were invaluable to me. Each and every word, each submission and rejection was part of the learning process. 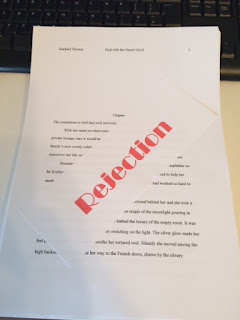 None of the time and effort I put into those stories is wasted. Some merely form part of my apprenticeship, but others, with a fresh pair of eyes and a little more experience, could be rewritten.
But how do you know if a story can be rewritten?
For me it was simply that the characters just wouldn’t leave me alone. I first met Zafir and his horse whisperer heroine, Destiny over three years ago. I just hadn’t told their story right the first time and he was insisting I try again.
Things to consider when rewriting a story.
1.           Your characters must thrill you, or as in my case, constantly linger in your mind long after the rejection has landed. They will all but demand their story is written again.
2.           Look at where you started the first time. Was that really the beginning? Can you start the story at a better point, one that see’s things changing for your characters, bringing them together more convincingly?
3.           Are they really who you thought they were? Interviewing your characters and getting to know them is crucial, but did you ask the right questions the first time? Did they tell you everything you needed to know?
4.           Delve deeper emotionally. This is what I always do, not digging deep enough, but by finding out more about your characters, their hopes and dreams, fears and aspirations it can lead to some surprising revelations – and a new story!
This is a process I’ve just been through with Zafir and Destiny and their brand new story was accepted last week and will be out next year. But if you want a sneak preview of the story, take a quick look at Zafir and Destiny's board on my Pinterest.

I hope this post fires up your determination if you too have just had a rejection. It doesn't mean the end for you or that story, so keep going!