Published: 14 October 2013
On the morning of October 14th 1913 my great great grandfather Charles Frederick Hill started a new job at Universal Colliery, Senghennydd. He lived with his wife Lillian in Caerphilly and was not a miner, but a tailor and in hard times had taken the job in the mine.At ten past eight that morning an explosion ripped through the mine, killing 439 men and even boys as young as fourteen. My great great grandfather was among them and was the 237th casualty to be recovered from the mine. He was just 37.Whilst my mother was researching our family tree this terrible story came to light and she was fortunate enough to be able to talk to older relatives about the disaster and was even given a book The Valley of the Shadow by John H Brown about the disaster in 1913 as well as a previous one in 1901 in which 81 med died. 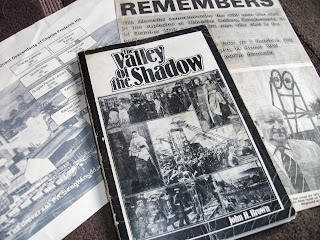 Today at 12.25, a memorial is being unveiled to mark the centenary and remember other Welsh mining disasters. More about this story can be found here.